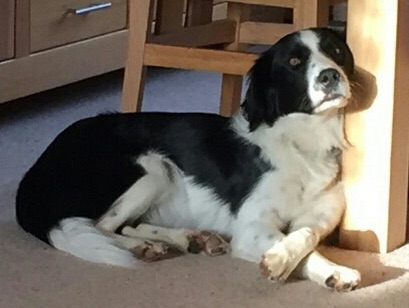 We rescued Skip who was approx 1 year old from a rescue Charity in Sussex without ever meeting him. He came from Ireland and he was advertised as a Collie but is in fact as Springer Collie cross…we think! We immediately had problems with him and we think he had never seen cars or car headlights in his life. He pulled, lunged, and basically was so difficult to control. We went to a very expensive behaviourist, and then put him in a trainers hands for 6 weeks, hoping that he would come back a lot better . Alas this was not the case and the final straw for us was when he decided he could scale our 6ft fence, which meant he could escape on to the main road and injure himself or cause accidents. At this point we emailed the charity saying we couldn’t keep him and he was almost on his way back to the rescue charity. However we felt so guilty we thought long and hard about how could we still keep him. We Decided to build a Colditz type angled fence on top of the 6 ft one which would hopefully keep him in. We were then given Franks name and decided to give it a go. Frank had us walking around the compound without Skip, then showed us how Skip could behave on a lead. Wow! What a difference. The two hours we spent with Frank gave us so much hope. We have put into practice what Frank has taught us and if we’re honest it’s more us that needs the training than Skip. A year on he’s improved remarkably. Yes he still pulls and his recall still needs working on, but he’s now settled into being a part of our family. We still go to Frank to be trained, and Skip comes along too…..! We only wish we had gone to Frank from the outset as we had 4 months wasted time and money with the other trainer and behavourist, and I have no hesitation in recommending Frank for any dog that needs training.