Field Trial Champion In the Making 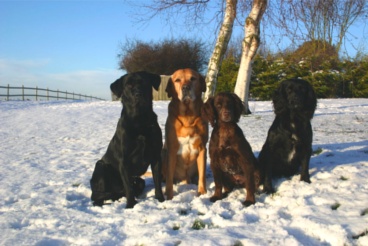 I have been a labrador chap all my life and without the help of my daughter and trainer Frank Walker (no family connection) would have probably have remained so.

The daughter pleaded to have a ‘prettier’ dog and was sufficiently interested in this to bother locating a litter of working Cockers. It turned out I knew the bitch which encouraged me, and so one pup, Darcy, was acquired.

I thought all Spaniels were air-heads. Hmmm perhaps I’m one! The intelligence of the Cocker was amazing to the point where I had to quickly source a trainer who understood Spaniels to get me up to speed.

Spaniel number one, Darcy (the black one in the picture), went to Frank for two periods totaling nine weeks. The result was truly amazing then and three years on his performance is simply stunning, never puts a paw wrong. But possibly he is about to be surpassed by his half brother Jasper who is now just nine months – after six weeks with Frank will stop on a whistle, turn left, turn right, hunt, pick up and then drop a dummy on command, work out to 50m on seen birds 10m on blinds as of today.

One of the great things about working with Frank is his precise and prescriptive approach to training both the dog and its owner. Maybe it is his military style, who knows. It is like having your car permanently  plugged into to a diagnostic computer. Everything is analyzed, adjusted, fine tuned. His new book works exactly like that too – it is a manual rather than a book and you can quickly get straight to the point that you want to read about and identify the key action points.

I think I may have a future Field Trial Champion. Jasper is tormented by energy. When relaxing he sits in his run and watches head up for blackbirds and pigeons, or if indoors at the moment watches the left / right passage of the yellow tennis ball at the Paris Open on a plasma screen. It could be worse. It could be chaos!